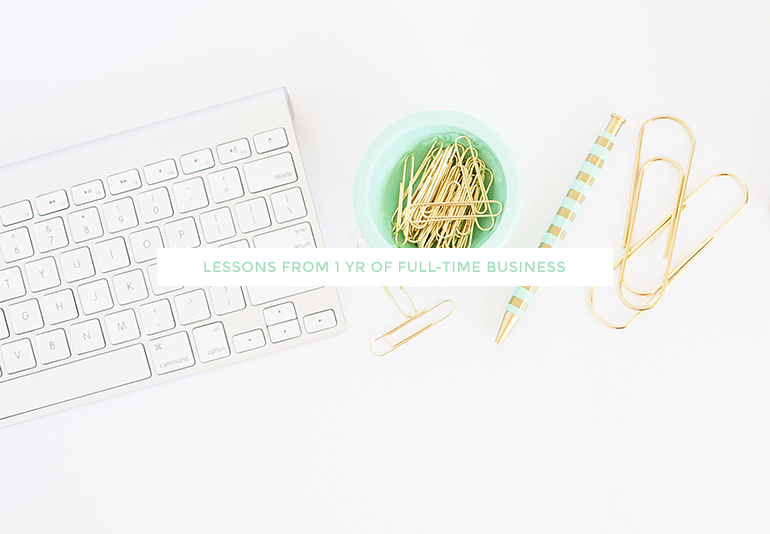 A year ago from this past Friday I graduated college. As crazy as it is to believe, that means that I’ve been working full-time for a year now, after working part-time with school for the previous two years. When you’re working part-time, there’s this special hustle that you have. You don’t have as much time to work, so you have to just get it done even when sometimes you’re not feeling it. It means sometimes not having set boundaries, and you often are working on multiple things at once to maximize your time.

However, the second you go full-time as a business owner, you set the stage for what your days will look like. You’re likely making more money, which means you have more say as to what projects you take on. It’s up to you to create the work / life balance that you want. You have to remember that you deserve vacation days and decide when to take them.

Since things certainly change when you go full-time, I wanted to share some lessons from this past year in my business!

I believe I’ve talked about this before, but I learned from the mistakes of those I looked up to while in college. I saw fellow freelancers that had been in business for several years already talking about how they felt burnt out with their business, and they were putting boundaries in place to fix that. Things like no working or even answer emails on the weekend or after the “off” time during the week. Putting those boundaries in place early on in my business has definitely saved me from burn out as well as possibly even resenting clients for overworking myself.

This has come into play more recently, but it’s something that will never go away. If you work for yourself, there are going to be times of the year when you will definitely see the ebb and flow of work (and money) coming in. For me, I had tons of work at the end of last year, but I haven’t had quite as much this year so far. Instead of letting it derail you, you have to just learn to deal with it and save money for when you don’t have as much work. You also can take advantage of the times you don’t have as much work to work on the processes within your business or your own types of projects.

Failure is a real thing, and you’re not shielded from it

Something that I’ve been wanting to talk about to y’all for a while is that you can fail, but you can’t let that scare you from trying new things. I opened up to my email list a few months ago about the total failure of Brand Catalyst, the four week live ecourse I launched late last year. So many bloggers and business owners launch things and make it look so easy, and like everyone can be successful at everything. The sad truth is, that’s not true. You may launch something, and it may fail. You’re not shielded from failure, but ultimately you can’t let that stop you from trying something else.

The Law of Inertia comes to play in business

Remember that whole “what’s at rest stays at rest”? Well, it can be applied to business. If you slow down or stop working for a while, you’re going to find yourself with little to no motivation to get back into it. I struggled the most with this after taking nearly a month off for Christmas. While I was still working on a few blog posts and the redesign, development, and launch of the new design of my blog and portfolio site, I still had a huge lag in motivation back into the swing of things with work once January rolled around. This doesn’t mean you can never take time off, but it’s important to know how you’ll respond to taking extended periods of time away from work.

If someone offers a peek into their business, don’t be afraid to look

It’s important that you don’t straight up copy the way someone else works, but you can learn a lot from taking a peek at how your fellow business owners (in your niche) work. I’ve learned that it’s all about trying new things that you’ve learned to see if it works for you and tweaking as you need to. For example,  for the first few years of my business, I was making each invoice in Adobe Illustrator and sending it as a PDF to clients. It was something others’ in my niche did, so I did it too. Until I saw others simplifying their process by just using something like Freshbooks or even PayPal. So I tried using PayPal for invoices, and I’ve stuck with it because it saves time and is much easier to do. Again I’ll repeat, though, it’s important that you don’t just copy the way someone does something or perhaps what they’re sending to clients.

When you’re running your own business, you’re constantly learning new things – so I’m sure this isn’t all I learned or the last that I’ll learn while I’m working. Above all, I learned that there’s nothing I’d rather be doing. I can’t see myself working at an agency or for someone else. I can’t imagine having to commute somewhere else or not being able to just go run errands if I need to get out of the house.